I've heard of turkeys in Winchester & some occasional sitings in Cambridge. I was surprised to find one eying out tomato plants in Medford, though. She seemed largely unperturbed by the decidely non-rural setting. 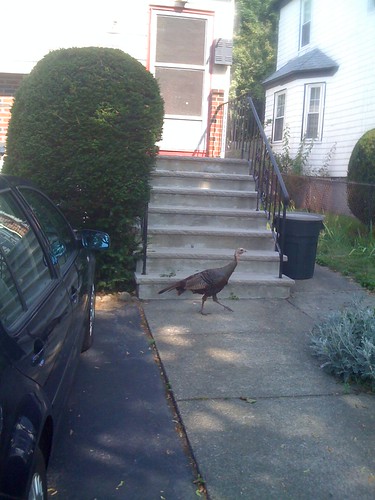 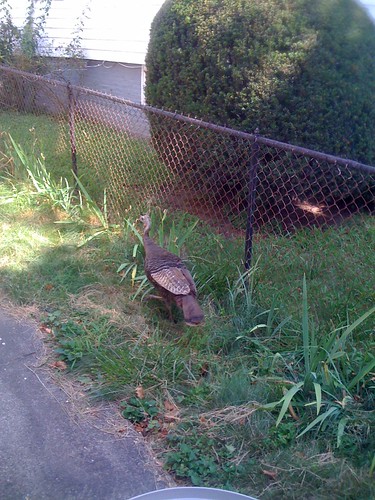 As introduced by ams16 & commented on by fairdice, Chain Factor is an addictive little web game @ http://chainfactor.com/index.php.

Bizarrely, I've had the high score in the basic game for over a day. This is possibly 1) further proof that something is terribly wrong in the world, or 2) an indication that my Chain Factor strategy is actually good.

Assuming, for the sake of argument, that it's #2, I'm posting here the approach that I'm using, so that other LJ Chain Factor addicts might have their day of glory too.

Normally I find the flavortext on Cute Overload too twee & annoying. But this morning's was LOL funny, especially since the Shedd Aquarium was one of my favorite special places to visit growing up.

Here's the text (although the pic of young Mr. McWrinklesides on their site is good to give some context):

"This is such a bummer, People. Apparently, the name-a-beluga whale contest over at Shedd aquarium will only accept Inuit/Indian names as contest entries. Last time I checked, neither "Humptyback Fishtybuns", nor "Mr. Splashy von Beluga Whalehouser", NOR "Smiley Q McWrinklesides" were of Inuit origin.

This is a total official rules McBummer, and I should have caught it!!! I'm sorry! Sure, we could all rally behind "Inungoark" or "Kappianartok", but that sounds like a Klingon or a foul-tasting stomach-settling medicine at best."

</form>
What American accent do you have?
Created by Xavier on Memegen.net

Midland. The Midland (please don't confuse with "Midwest") itself is the neutral zone between the North and South. But just because you have a Midland accent doesn't mean you're from there. Since it is considered a neutral, default, "non-regional" accent you could easily be from someplace without its own accent, like Florida, or a big city in the South like Dallas, Houston, or Atlanta.

Take this quiz now - it's easy!

This morning I was impressed that the February link pass I put on my "Charlie" card worked. It didn't even seem to erase the ~$8 of non-monthly pass value I had stored on it (although I'm not quite sure how I'd be sure of this).

Then this evening, the T gates at Downtown Crossing were mobbed with about 100 people. All three of the gates were rejecting everone's cards. I and many others tried saying to the T employee... "look, I've got a monthly pass, just let me in". She said, "Oh, let me see." And looked at my card. Of course, there was no way at all for her to know it had a monthly pass. She started threatenning "If you go through I'll have to call the cops!" One guy responded "Good. Then maybe they'll have the sense to open the gates & let us in."

The wide handicapped gate happened to be open & was already on the far side of it, arguing with her. I was tempted just to walk to the trains, but, from some misplaced sense of decency reached back & touched my card to the sensor. The screen, displayed "pass good to 2/28" Maybe the T agent had overridden that gate & it really didnt' work - but it was excuse enough for me. I just made the train & had a good, extra long, packed ride.

So, what was wrong with the gates? Ruthling says her T pass is updated automatically. Her employer sends a list (of names? of Charlie card serial numbers?) to the T, and the stations automatically know the passes are valid. R also has heard it's possible to buy passes on the web. Given that, with these two payment methods, you never need to touch your card to a vending machine, that means that every gate must either be programmed with or have a network connection to the database of all users (!?). Maybe what I was seeing was a "our server is down" error. Thank god it was localized to just one entryway to one station.

Imagine what would happen if the central server died. I can't believe that a commuter transportation system would operate this way. If the information was just encoded on the cards it would be so much more robust & less prone to system-wide failure. Does anyone actually know how it works & whether there really are adequate safeguards to prevent a T-wide gate failure?

I guess the T can avoid jokes about "Charlie" getting stuck on the MBTA & not getting off, if "Charlie" can't get past the gates in the first place.

Does good Greek take out/catering exist in the Somerville/Medford area? Does anyone have experience with the Greek Corner Restaurant on Mass Ave in Cambridge?

Through no fault of my own, Palindrome, AKA Dr. Awkward, was this year's MIT Mystery Hunt winners. The coin was found around 2 AM Sunday morning.

I was there for Saturday afternoon, and spent most of my time on a puzzle that remained unsolved by the group (of maybe 40 people). Jeremy, Aidan & Kevin (of the TND crowd) likely helped out more than I did.

This means, of course, that some of us may be contributing to writing next year's hunt. Whee!

"Simple" projects always take far longer than expected... but after several weekends hunting for materials, cutting them to size with power tools, digging holes, & yanking wisteria vines from trees, the fence project has been declared done. Many thanks to Hauntmeister for his Skilsaw & Ruthling for heavy lifting & longsuffering tolerance.

Unfortunately, I'd need to upgrade my so-seldom-used LJ account to post real pictures (hmm, maybe later). For now, though, I'll have to make do with a tiny icon.
Collapse